This fall in 7th grade, we all went camping in Western Massachusetts. Our grade went in teams of 4 teachers, therefore the whole grade did not go all at once. My team was the first to go on the trip. While we were there, we learned about different types of rocks, early landforms, dinosaurs, mudslides, weathering, erosion, deposition, the impacts Hurricane Irene had on the land in Savoy, MA and much, much more.

All of these things that we learned about were recorded in our field journals that we kept throughout the trip. This information was key to making a successful final product. When we all got back from the camping trips, scholars were put into groups of 4-5 and we made our final product, a calendar. Each group produced a few slides to represent their knowledge of one of the subjects we learned about throughout the expedition.

One of the trips during the fieldwork was to a mudslide along route 2. When we arrived at the mudslide, we were split into two groups. One group measured the mudslide while the group I was in looked for signs of WED which stands for weathering, erosion and deposition. Weathering is the process of breaking down rock into smaller pieces or dissolving it.  Weathering produces sediment of all sizes. Erosion is the picking up and moving of sediment to a new location. Deposition is the putting down of sediment in a new location. 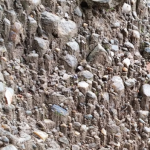 We discovered tiny mud towers along the sides of the mudslide. You can see it in the picture to the left. You can also see in the photo that only the dirt, where rocks weren’t, got weathered and eroded away. When rain and other water sources weathered away this dirt, the water carried the dirt away. This was a really cool discovery for us as scholars. 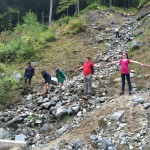 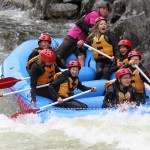 and turbulent parts of a river. The river we went down was full of them. Sometimes when we went over a rapid, our boat guide would intentionally turn the boat sideways so the water would splash into our boat. Early in the ride, we took a picture. For my crew’s picture, we all held onto each other, and leaned our heads out of the boat to touch the water. I nearly fell in but I got pulled back up by my crew mates. One of the major rapids that we went across was called Zoar Gap. There were two rocks on either side and we had to go right through the middle of it. All the water that rushed through the river was channeled between those two rocks so it created a huge rapid. At this point in the trip, we all had to paddle as hard as we could. We were very wet after going through that rapid but it was a lot of fun. Also along the ride, we learned about hurricane damage. We saw what kind of damage Hurricane Irene had done to the river and the banks. We saw where the river line used to be and we saw where it was now. The high river bank told us that the water was really high during Hurricane Irene. 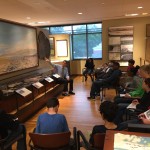 At the Beneski Museum, we met with an expert and he explained to us all about the history of the earth and about all the organisms that became during these early times. We learned that when pangea broke up, cracks were formed and lava leaked out. The lava cooled and mended the cracks. Along the front wall of the museum was a row of drawers and those drawers contained fossils. The bottom floor of the museum was all dinosaur footprints. Some of the prints were kept similar to a book. This was helpful because it showed us about prints and impressions. We learned that when animals (dinosaurs) stepped in mud, the print would remain in the mud underneath. While we were at the Beneski Museum, we were able to get information on this topic of geologic time from an expert.

After the fieldwork, when all the trips had gone, collected data and knowledge, we started to prepare for our culminating event. In order to do that, each scholar was put into a small group. Each group was given a topic and we had to write up a few slides  with information from that topic. My group had to write up slides on The Science Behind Earthquakes, New England’s Earthquake Problem and The Cape Ann Earthquake. Not all groups had slides based on science. Some groups did ELA related things. For example, all throughout the expedition, we were learning about the 4 stages of emergency management: mitigation, preparedness, response and recovery. The groups that had an ELA slide, wrote about these 4 stages and why they were important. They also added in excerpts from their opinion speech. After each group went through a series of peer edits and teacher edits, the slides were finally ready for publishing. Each slide was published into our calendar. At our culminating event, we presented our calendar pages and other work we did throughout the trimester.