On Tuesday February 6, 2018, Christa McAuliffe Charter School 8th grader, Elana Gelfand, took a stand for a local issue she feels passionately about, the renaming of Indian Head Road in Framingham. As you can read in Elana’s Proposal to the Framingham City Council, she has felt uneasy about the name Indian Head Road for years, noting that its historical connotation relates to the beheading of Native Americans in exchange for money in the 1800s, a time when Native Americans were being systematically pushed out of their own land and communities.  As an avid student of both history and current events, Elana followed a thorough process to look into the history of this street name and the effect, if any, on the group of people for whom it was named.  Elana not only did thorough research about Native American history both nationally and locally, but most importantly, she spoke to the members of indigenous groups in the area.  Elana spoke with a local Indigenous Rights Activist and member of the Nipmuc tribe as well as Native American author, poet, and cultural educator, Larry Spotted Man Crow. The Indigenous Rights Activist explained the importance of acknowledging that meanings can hit people differently based on their identities.  She told Elana about the street name, “I don’t hear it and think, wow, I feel honored. I hear it and think, typically, ‘they’ don’t understand how derogatory it actually is and it’s awful to live as an invisible person.” 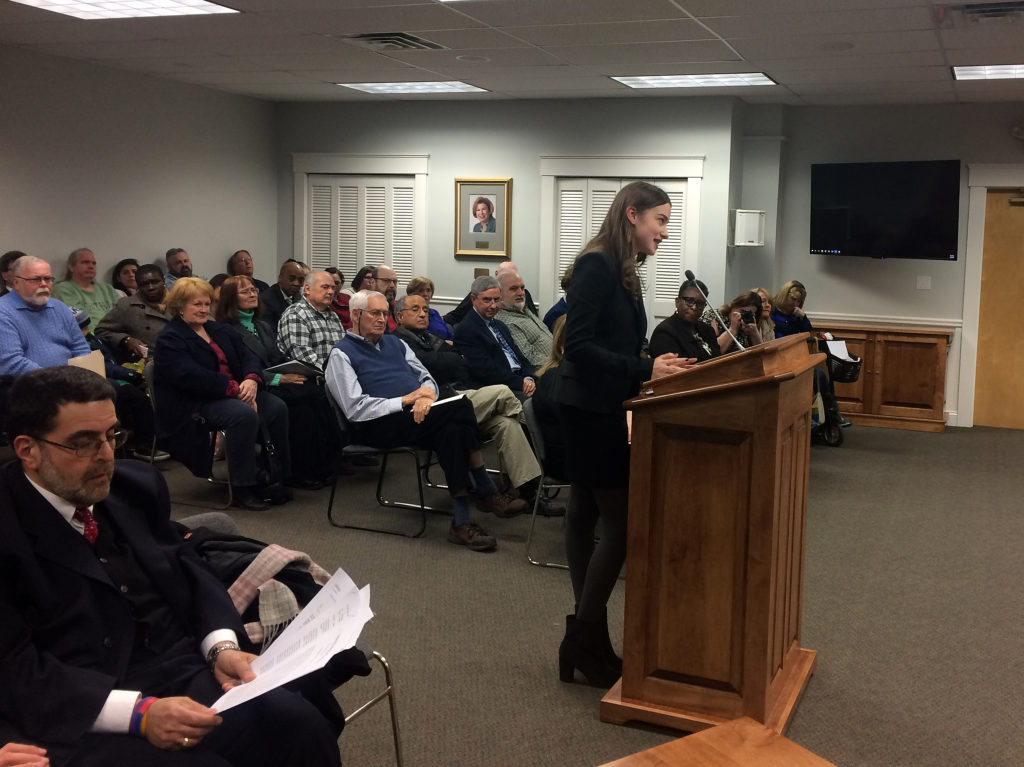 Just after 7 o’clock, behind a sturdy wooden podium, Elana stood tall and proud, and delivered her proposal in a confident and clear voice. The Council men and women were visibly impressed with her diligent research, and discussed their next steps on this important issue, including contacting residents of the street and looking into the procedural steps necessary to change a street name. Many of them approached her after the meeting congratulating her on her courage to speak up.

At the end of the town meeting, we were able to meet and speak with Mayor Spicer, who praised Elana for the time she dedicated to this issue and her willingness to take a stand for a group of people that often does not have a voice themselves. Elana has made McAuliffe proud by engaging in her civic responsibility to speak up against something that she and members of local Native American tribes acknowledge as quietly harmful to some, yet invisible to many others. As a McAuliffe teacher, my hope is that my students use their strong habits of work and learning to make the world around them a safer, more inclusive place for all people. Hats off to Elana Gelfand for being a leader in this work!

The City Council’s response to Elana can be read here.