Peace Flags are Flying OUT of McAuliffe Charter School 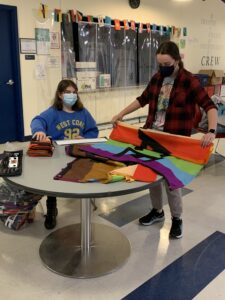 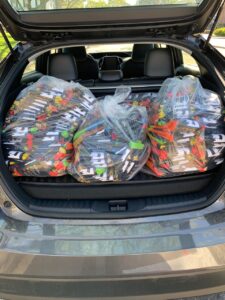 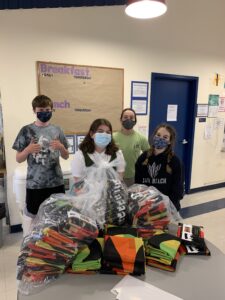 Peace flags are flying OUT of McAuliffe Charter School in Framingham as scholars join together after school to fold and prepare hundreds of flags for distribution around the country and world. The after school Peace Flag Club was renamed Peace Flag Committee at the suggestion of Amaya Langer, a 7th grader in the group. She felt the work they were doing was too important to be called a “club” and wanted the name to reflect the far-reaching significance of their work. The group concurred and the change was made. The connections between the Peace Flag Movement and McAuliffe go back to its origin 5 years ago.

The Peace Flag Movement began as the Rainbow Peace Flag Project by Maggie Sky, a parent of a McAuliffe scholar in 2016. She responded to acts of violence and injustice around the world and within her community by purchasing 100 rainbow peace flags and putting them in a box labeled “Free Flags” in front of her house. The flags disappeared quickly so she ordered another 100. Maggie ultimately collaborated with a local artist to redesign the flag to fulfill a bigger mission “to unite the world in the fight for equity and justice for all people.” They worked with other community leaders and focus groups, seeking feedback from people of various cultures, races, spiritualities, genders, sexuality, ages, and abilities to create a flag symbolic of all humanity. As the PEACE Flag Movement grows and develops a broader reach, providing flags and their message throughout the country, their work has expanded to include an educational component to teach students about it’s important message.

McAuliffe anchors its schoolwide norms in the HOWLs – Habits Of Work and Learning. These habits include Perseverance, Inquiry, Responsibility, Kindness, and Collaboration. Maggie’s daughter, Tia, a 2017 McAuliffe alumni began to be involved in the Peace Flag Movement exemplifying each of the HOWLs through her volunteer work. During high school, Tia helped design flyers that described the history and meaning of the flag and ran youth coalitions to engage her peers in important discussions about fighting bias, prejudice, and injustice while folding and packaging flags for distribution.

The Having of Wonderful Ideas – Participation in this movement has fostered curiosity about the world, leading to opportunities for scholars to think about important issues and what they can do, even now as middle school scholars, to create solutions to problems. They bring fresh ideas and perspectives for spreading the message of peace and justice to their community.

Empathy and Caring – Scholars are encouraged to think about each other and those in their communities with empathy as they discuss the meaning of the PEACE Flag’s mission statement and how to use the flag as a symbol of caring for all people.

Diversity and Inclusion – The first line of the PEACE Flag Movement mission statement states that the movement “seeks to unite the world with a symbol of equity and justice for every culture, race, spirituality, gender, sexuality, ability, and age.” This is consistent with the principle of diversity and inclusion in EL Education in which “scholars investigate and value their different histories and talents as well as those of other communities and cultures”.

Service and Compassion – An often-repeated phrase at McAuliffe is “We are Crew, Not Passengers.” Scholars and teachers are strengthened by acts of consequential service to others, and one of an EL Education school’s primary functions is to prepare scholars with the attitudes and skills to learn from and be of service. As scholars in the PEACE Flag Committee at McAuliffe engage in the meaningful work of preparing flags for distribution and getting the message out, they are performing a great service born out of compassion for all.

The Peace Flag Committee work has been invaluable in promoting the mission of “seeking to unite the world with a symbol of unity and justice” and to each scholar’s deeper understanding of this message. They have folded and wrapped over 750 flags to be distributed around the country while engaging in discussions about the meaning of justice, peace, and solidarity.