Entering into one of the eighth grade science classrooms, either that of Mr. McKellar or Mr. Anderson, one can see the method of expeditionary learning present in lessons and activities.  The Christa McAuliffe Charter School prides itself as a hands-on school, from fieldwork at organizations to take the next step in a studied unit, to fun and interactive classes to engage students and keep the knowledge in with the thrill of the experience.  Myself, I personally enjoy how all of our work comes together into a big presentation night; such events document the culmination of our expedition.  Specifically, the space expedition for McAuliffe eighth grade came together with tremendous effort, and thus deserves recognition and explanation. 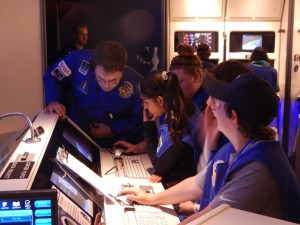 We started off the beginning of the school year in Science by studying space and celestial bodies, such as galaxies, solar systems, and stars.  In addition, a study on gravity and how it affects the listed bodies. After two months of this unit, the class began to venture into studying different technologies and how they originated with similar inventions at the National Aeronautics and Space Administration, abbreviated as NASA; these are called ¨NASA Spinoffs.¨  As a grade, we “kicked off” this new expedition topic with fieldwork at the Christa Corrigan McAuliffe Challenger Center, at Framingham State University.  We worked in pairs to complete tasks in their mock-International Space Station. Half of the group was at ¨mission control,¨ where they did research on different environmental topics, in order to analyze how it could affect the station.  If there was an issue, such as a hurricane, we relayed the discovery to the communications team, who in turn talked with communications aboard the space vessel.  Teams aboard the I.S.S. ran tests of biology and worked to build a small satellite to “launch into space”.  The experience helped us to better understand the cooperation needed and relevant technology that is used in space.

Looking back on our classes with the new expedition, groups were made after the fieldwork to study different NASA Spinoffs.  Among these inventions were the Infrared Ear Thermometer, Temperfoam, and Invisalign braces.  My group of three researched the iRobot Packbot, a robot that is capable of going into dangerous places as an alternative to humans, retrieving objects, and collecting intelligence when used by the military or other public service organizations.  To collect the information we needed to explain the technology. We had a note catcher to help us organize our answers to the following questions: How can we use this space research to improve our life on Earth? and Why did scientists invent this device or technology? Our resources included video demonstrations, news reports, and the company’s website, to name a few.
One specific thing that helped us develop our functionality as a group were HOWLs check-ins.  HOWLs stands for “Habits of Work and Learning,” and reflected on our work with the group, as well as individually, to hold ourselves accountable for progress and monitor what we can improve upon with follow-up goals. 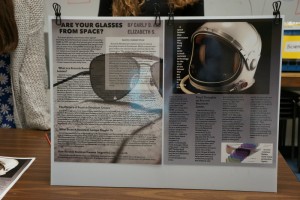 Another aspect of the project was a math connection.  This may be an equation that relates to the technology, followed by example problems and an explanation of how it connects.  My group’s example for the iRobot Packbot was the equation, “w=mg”, meaning “weight equals mass times gravitational acceleration.”  This was relevant because, since the Packbot inspired space exploration technology, if the robot itself went to space, then we would need the weight of it on different space bodies for data.

Our final product was set to be a magazine article that addresses all aspects of our scholar note catcher; we were guided to make it a high quality piece of work, as it was to be compiled into a magazine with twenty or so articles, all of different technologies.  After we put all of our answers into paragraph style, and added introduction 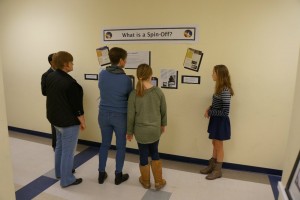 and conclusion paragraphs, the groups reached out to others for the revision and editing process.  The owner of Freedom Digital Printing, our printing company, spoke to all of the eighth graders as our expert in the field of print publications.  He talked about finding images with a high DPI, a measurement regarding resolution.  Picking a good font and having an efficient layout in the article is very important, too, he said.  The groups took this into account when putting together their work, formatting and content.  After receiving content feedback from parents, teachers, and peers, and after using that to better our product, our science teachers taught us how to use an online software, called Lucidpress.  Here, we put in our essay, images, titles, and relevant math.  We were able to format our information whichever way we wished, which really helped groups convey their main idea through graphics, too, and not just words.

In preparation for our culminating event, all of the scholars wrote up speeches to summarize different aspects of the article, an example being what scientists can learn from the technology, or the math connection, as previously described.  In class, we devoted a lot of time for presenting our speeches to other groups and getting feedback on it.  A few days before the event, however, we got the posters and magazines from the printer back to then use in these in the run-throughs.

At the culminating event, all of the students came in early to set up, dressed for success.  Following a gallery walk of our expedition for the parents as everybody arrived was an introduction to the event, in which the audience were introduced to the expedition.  One special event, however, during this, was a video call from Joe Tanner, who personally knew and helped to train Christa McAuliffe for her mission to space.  He explained his job, about Christa, and her determination to teach from space.  With this in mind, everybody was ready for the commemorative 30th anniversary of the Challenger disaster. 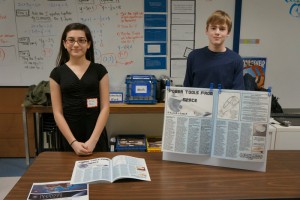 After the culmination of our hard work, seeing everything come together was an amazing thing to experience.  Family, friends, and McAuliffe community members were all very impressed with our high-quality work and the event.  It was incredible, from an academic standpoint, to be a part of this event and what it represents to the community.